We at Letters of the West love the forest. We would not have written a book about nature and forest-related things otherwise. Illustrator John Maddin and I are always interested in learning more about forest-y things, and how our national parks protect and allow access to natural areas.

July 13 – 19, 2020 is National Forest Week. There are online events throughout the week, including inclusion and safety on July 14.

So check this out! Let us know if you participated in any of the online activities. What did you learn?

Editor’s note: Once in a while, we at Letters of the West will mention a non-profit or business that aligns with our interests and values.  This month we wanted to talk about Friends of Outdoor School.  Thanks Kim Silva and Sophia Angullia of FODS for all you do!

By Michelle Walch, wellness blogger and Letters of the West co-author

It was the early 80s, October, and I was nervous and excited.  I may have cried a little.  My sleeping bag and bags were packed.  I didn’t really want to leave my home for a week, without my family.  Usually I’m a happy camper, but I was a bit anxious about spending five days along the Santiam River with a bunch of sixth graders from around the region I didn’t know. Soon my classmates and I were on a bus to the OMSI camp.

The camp counselors greeted my classmates and I. While I don’t remember specifics, I do remember singing songs, the cabins, eating in the mess hall (the food really wasn’t too bad!), my kitchen patrol duties, and of course the wood cookies with camp names burned on them.

At some point I settled in, and started to enjoy the activities, comradery, and the setting.  I  enjoyed going into the woods with my group, even though it was COLD and wet. We were learning about trees, fungus, animals, and the natural world.  Even though I was still a bit homesick by mid-week, the routine of camp and learning in the outdoors was so much fun.  Stories and songs by the campfire were the best. My friends and I sang that Muppets song for days afterwards.

On Friday morning, I was on the bus, and crying.  I didn’t want to leave camp.

COVID-19 has canceled Spring 2020 Outdoor School for 6th graders.  My daughter is one of those kids who won’t be going in 2020.  She’s kind of ambivalent about missing it, but I wish she could go.  That said, I hope Outdoor School is an experience for 6th grade students in the near future.  Even if a kid is on the fence about going, when they go they will carry wonderful memories of camp their whole life. 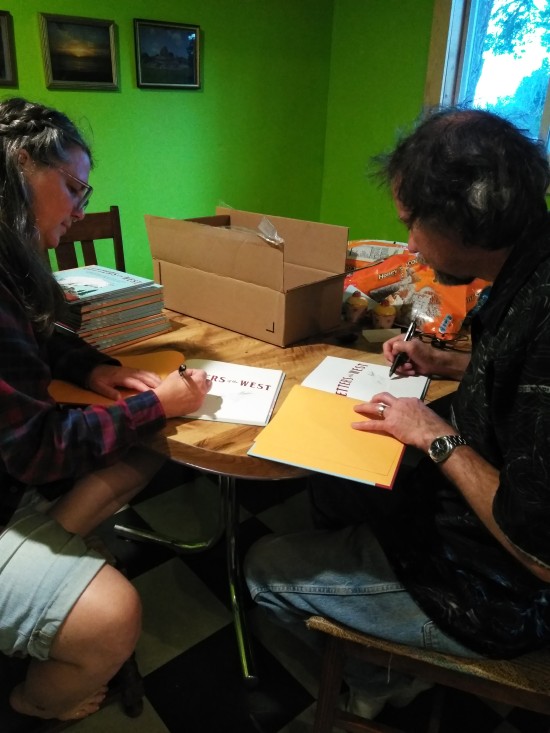 Six years ago, our children’s ABC book about nature, Letters of the West, was released.   I got the book idea around the time our daughter turned one, and my baby blues was starting to subside.  Now seems like the perfect time to look back.  What we have learned since the book hit the shelves?

Origin story: the book that came out of baby blues

Tragedy plus time equals comedy.  We’ve heard that one.  Whistling past the graveyard is another.  Songs, stories, art, distractions, especially creative distractions, are suvival techniques.  They can be cautionary tales.  Almost always they are marketing tools (guilty).  My own low-moment story happened when baby blues hit me really heard.  With the 2008 crash, I was unable to find work.  But amid the darkness light appears unexpectedly.  And that became the way out.

How did John and I come up with the book idea?  By now most have heard the story:  I was reading Awake to Nap by Nikki McClure to our nearly one-year-old daughter.  I really enjoyed the book’s artwork.  It reminded me of John’s nature artwork.  Maybe we could do an ABC book about nature?

John liked the idea and set to work.  We researched flora and fauna, which was fun.  Many subjects for letters were traditional: D for deer, C for cougar.

But we used a few that we hadn’t seen before: kinnikinnik,  pairie dog.

In the end we surprised ourselves with using Mount Hood for the beginning and ending: A for Alpenglow and Z for Zigzag, as in Zigzag, Oregon.

Talk Latin to me

John wanted to put the Latin words in the book.  What?  Really?  Later, our publisher liked that idea as well.  Turns out others like that too, even if  just scholars use it now. After all, we thought, it was a living language once that little children spoke as they were getting into their school togas back in Rome.

X is for Xeriscape

I am proud of X for Xeriscape.  Xeriscape is a low water landscape garden design. Why this works for the book:

The 2008 economic crash, and rising from the ashes

John finished the artwork in 2010.  Meanwhile the economy was moving through a slow recovery, as a result we had our doubts of getting published.  John researched self-publishing, but that could be expensive.  He researched other options such as Create Space.  We opted not to go that route.

I worked with my solo business advisor Jackie B. Peterson at Portland Community College’s Small Business Development Center.  She thought the artwork was fantastic and urged us to market it.

In 2013 we finally decided to send book submissions to publishers.  We got a response within the first three sent out.  Next thing we new, Portland-based publisher Craigmore Creations offered us a a very nice book deal.

Getting a book published is the height of most anyone’s career; an aspiration of many but achieved by few.  The validation speaks loudly.  Just someone picking up the publication costs, having the muscle to market it, and handle distribution is a dream.  And it helped.  We were nominiated for the 2014 Oregon Spirit Award to boot!  Pretty damn good for first time authors!

But it doesn’t pay the rent, even if our title was the top seller for August 2015 of all Craigmore Creations titles at that time.

Regardless, Letters of the West, An ABC Book of the Many Plants, Animals, and Other Curious Features of the West (the full name) continues to find new fans.

Since getting published, I’ve learned a couple things about the the book’s subject matter.  Things I was not aware of:

Naturalist Numbers, the counting book, is next

Letters of the West takes place on land, if you will.  Naturalist Numbers, the forthcoming book, features many ocean-dwellers.  Five out of the ten subjects are sea creatures.  This is interesting to note.  Many marine animals have uneven features, or so it would seem: seven fins of the flying fish, five teeth of the sea urchin.  Five to a million arms of the sea star.

Additionally, from a marketing perspective, it may be challenging to sell both books together.  Letters of the West is perfect for KOA Kampground at Mount Rushmore.  Naturalist Numbers, however, might sell better at a KOA on the California coast.  Remains to be seen!

Do you have a copy of our book?  Thoughts on it or the next book?  Leave a note in the comments.

Crazy clowns!  Skulls!  Peace symbols!  Cornerstone emblems of summer festivals!  Want to get some swag that shows your personal flair?  Go to my 13th Floor Designs and shop.

I love drawing flaming skulls and other cartoony stuff.  It’s fun to go all out.  And it is fun to see people wearing my designs.

I put the designs up on Teespring, which has a good rep for T-shirts and whatnot. Here’s a few of the designs, and a link to my main storefront page there. 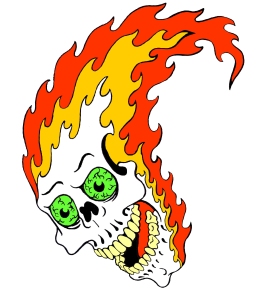 And here’s where to go to find this material. Have fun! https://teespring.com/stores/13th-floor-designs?aid=marketplace&tsmac=marketplace&tsmic=campaign